So far, our exorbitantly-priced “official” taxi ran out of gas in the rush-hour-packed streets of Nairobi on the way to the hotel from the airport. (So, we waited anxiously in a cab with all our belongings while being assured that God is Great and that all these people are Christians and that no one will touch us, but just to help God out, we were locked into the vehicle with all the windows rolled up while our taxi driver worked with a motorcyclist to get us some gas.) And a man on the streets (which are actually packed with incredibly friendly people who have offered us help and directions and even walked us all the way to the restaurant we were looking for) asked Dan if Dan would give me to him. (Dan’s first thought was, “she’s not mine to give,” and his second thought was that given my expensive tastes, Dan didn’t have enough cattle to actually make that trade.) And all we’ve gotten are these awesome pictures. 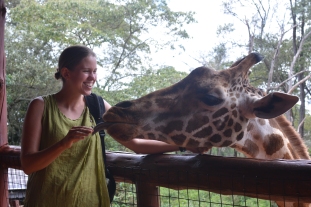 The elephants are from the Sheldrick Trust Orphans Project, which takes care of elephants orphaned due to poaching, starvation, or other “human-wildlife conflict.” The elephants are taken care of at the orphanage for about three years before beginning a 5-10 year process of being re-introduced to the wild through making friends with wild elephants. The folks at the orphanage told us that female graduates of the program often return to show off their wild-born babies to the folks working to reintroduce new elephants into the natural parks — elephants really do never forget. The giraffes are from the Giraffe Center, where 9 giraffes (2 males and 7 females) are part of a breeding program to increase the numbers of this endangered subspecies of giraffe. Before today, my favorite giraffe fact was that giraffe babies fall at least four feet to the ground when they are born. Today, that fact was enhanced by new knowledge that giraffes can actually sit down (though they generally must keep their head elevated to regulate their blood pressure), but they just don’t sit while they are giving birth, and that they have a 15-month gestation period.

Tomorrow is day one of our 24-day participatory camping safari, which will be spent in Nairobi, and then the “real” adventure begins, taking us through Uganda and Tanzania.

3 thoughts on “We’re in Africa”