Erin has the paddle boarding bug. Enjoying the zen of spending all thoughts on not falling over 😉 Our last Asia beach day of the trip.

After a small hiccup with airport security involving Erin’s favorite sunscreen we had a lovely flight to Thailand.

We ended up moving a few things around between our international flight and domestic flight. During that reorganization, we accidentally put the bag of sunscreen in our carry on. After we had checked bags we went through security and they said one bottle of sunscreen was over the size limit.

This was Erin’s favorite which she had just received as a resupply from her awesome mother a few days prior. Erin was arguing to keep it and trying to pour it into ridiculously small openings of other sunscreen bottles. Dan stood by trying to not argue knowing he had about 4 other too large to travel sunscreens they hadn’t found tucked away in his carry on. After failing to convince them to let us through, Erin took the bottle and said meet you at the gate and left security with her bottle in frustration headed back to the check in counter. I went to our gate to wait, and eventually heard this story.

Desk: Mam you cant check a bottle
Erin: (puts it in a zip lock bag) can I check this bag?
Desk: no no, a real bag
Erin: puts zip lock back inside larger black plastic bag
Desk: no no, you need luggage or box
Erin: (walks to nearby airport book store, please do you have any boxes around) Can I check this double bagged box with sunscreen
Desk: OK thank you

Lesson is, always check your sunscreen and never upset my wife 😉

Erin sleeps with the fishes

We celebrate joy to the fishes of the deep blue sea 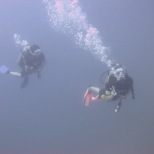 We swim with the fishes

We got some scuba diving in during our Thailand visit. We are diving on the island of Ko Samui, which has been lovely. We chose to dive with Discovery Dive Center. It included “free” photos with your diving… IE you get photos for free but they aren’t the cheapest dive operators on the island, not that I ever look for “cheapest” when diving 😉

The water was pretty dang warm, but visibility doesn’t match Caribbean / Mexico. The reef and fish are in much better shape though, which is nice. Hadn’t seen schools of fish this large for a long time.  Saw a school so large and dense that for about 30 seconds I thought a whale shark was coming into view, but it just turned out to be a massive school of fish coming in from the distance. Sadly, no whale sharks on our dives. Can’t complain we beat the bad weather (monsoon) to the best dive site on these small islands.

Our last stop in Malaysia was Malacca, so we could see something outside of the big city. We had delicious food for next to nothing, and learned some history. The port at Malacca was so important to early trade that it was considered the capital of the world. It lead to some of the first maritime laws, harbor masters, and usages of multiple currencies. The strait of Malacca, now often called the strait of Malaysia, still sees 120,000 ships pass by. No ships really doc with Malacca anymore as Penang and Singapore have long since surpassed this old port town. Now the river leading to the ocean has tour boats and is surrounded by lovely restaurants for tourists, both local and foreign alike.

The Malacca church needs to be straightened out a bit (picture doesn’t show it too well, but it is like the leaning tower of Pisa).

The once famous river that had the largest market in the world, now home of cute cafes, and good Indian food.

Erin tries a mystery egg and sausage stick, got to eat something odd at the night market. The melting honey pastries were the best.

The most delicious food in Malacca, red pork noodles… The locals wait in lines for over an hour to eat these $1.50 noodles… apparently no one has thought to just raise the price 😉

Food is very popular here both locals and tourists line up for hours at the favorite spots. Both the famous chicken rice balls and city satay had over hour long waits… Sadly neither of those was worth the wait, but the red pork noodles mentioned above was easily worth the wait. Duck noodles below had no wait at all and were pretty outstanding as well.

On a helipad converted into a bar, to be precise.

As a side note, there is something awesome about a place where the evening Azan (Islamic call to prayer) is immediately followed by fireworks in celebration of the Hindu Autumn Festival of Deepvali. 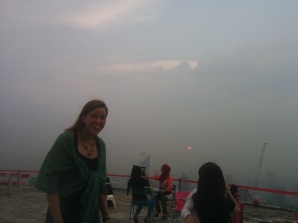 We also explored the Batu caves.

This guy is just chilling in a cave.

And, yes, while I was taking these pictures I did feel just like the tourists who visit DC and then ask me for their help getting their picture with the squirrels, but just as those tourists maintain that squirrels are cute, I say that so are these monkeys.

Vertical pano gives and idea of the dizzying heights of the towers.

Dan has been looking at his pictures over the last several weeks and saying how we have “a lifetime of amazing pictures.” Now, admittedly, Dan’s camera is better than mine, and I’ve been busy — booking bus tickets, doing laundry, knocking ants off the bed, reading, squatting over toilets, packing, unpacking…I don’t know — but it wasn’t until today that I had a chance to look through my last six weeks of pictures, and OMG. Some of my absolute favorites are below, and links to some of the galleries are below that. 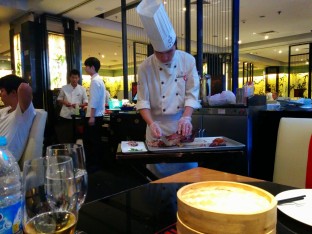 Selfies at the Great Wall.

View from Dragon’s Back in Hong Kong.

Motorbike Tour in Hoi An.

View of the river from our guesthouse in Hoi An. 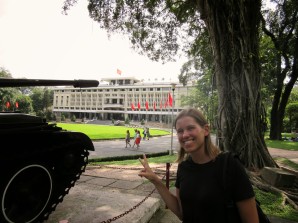 Replica of the tank that stormed what is now, “Reunification Palace” in what is now Ho Chi Minh City. 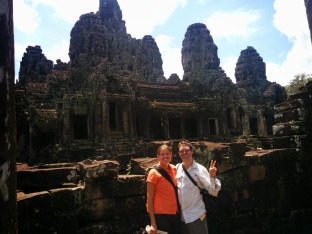 Phare Circus (http://www.pharecambodiancircus.org/circus/) — Put on by once-disadvantaged youth educated and trained in Cambodia.

As explained in the Kampot Survival Guide (a must-read publication during your trip to Kampot):

“Corruption. There is no corruption in Cambodia, none at all! The country, like all of its neighbours, is commission based, that’s why it’s so easy to do things here, everybody will help you because they earn a small fee for their effort.

Waterfall outside of Siem Reap

French architecture. Cheese. Real drip coffee. And a free upgrade to a room with a balcony and a view. Phnom Penh was surprisingly lovely. 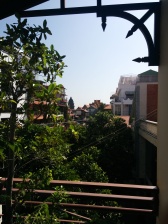 View from our balcony.

Erin with the king’s palace 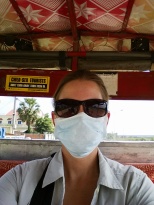 For dust, not Ebola.

Slept under a mosquito net and through blackouts and woke up to the rooster under our bungalow. Learned a new sport (paddleboarding) and a new drink (a Ricard).

Really enjoyed our time at GreenHouse. I once heard it described as “just like a bungalow over the sea on an island, without the sea or the island.” Couldn’t agree more. But, great river views and breezes, and better French food and cappuccinos than most islands I’ve been to.

Adventures of the Miller Mayers
Blog at WordPress.com.
Loading Comments...