“Oh my god, there is a buffalo right behind us.”

Not the offending buffalo, but one with a similar expression.

Over the course of four days we rode across most of Kenya and Uganda in an overland truck (it’s a truck, not a f***ing bus), crossing the equator a couple of times, and camping along the way. We advanced from standard users to advanced users of squat toilets. I got safari ants up my pants all the way to my crotch, so that when they started biting, I had to actually drop trou in the middle of the trail and in front of our African guide and half of my truck crew, while Dan and I both worked to peel them off. (Travel tip: ALWAYS tuck your pants into your socks in the bush, plus, it’s a super cool look.) And all we got were these awesome pictures.

Sunrise the morning of our gorilla tracking. 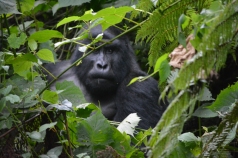 What we actually saw when we looked out.

Momma gorilla with a baby on her back

A mama gorilla with a baby on her back (baby not shown).

Panorama from the gorilla walk.
We tracked wild gorillas through the Ugandan mountains. There are only 600 mountain gorillas remaining in the wild, roughly split between Uganda and Rwanda. Of the roughly 300 gorillas in Uganda, approximately 100 are habituated to humans — that is, to fund conservation efforts, they tolerate humans taking pictures of them for about an hour each day. The trick, of course, is that the trackers just track gorillas, using GPS to find the approximate location of the habituated groups, but if the groups cross paths, they cannot be sure whether they are tracking the habituated groups or wild families. Our trackers found truly wild mountain gorillas, and then brought us along to track them, through the “deep bush” (i.e. you need a porter in front of you cutting away the forest, helping you find your footing, and grunting in order to stop the wild silverback from charging you) for three hours. Our total hike time was about 7 hours — so it took us about two hours each way to get to where we left the trail. But we did get to see truly wild mountain gorillas — the silverback protected the females and their babies (often giving our trackers and porters a bit of a scare and causing us to nearly need a change of underwear), and the females carried their babies on their backs, running away from us large, machete-wielding, picture-taking, fellow primates. After three hours in the bush, and getting a few, half-decent shots, we were — as several of our truckmates might say — completely knackered. So we went back to our bags for some much needed lunch and water (we had left all our provisions behind when we thought we were just five minutes away from an habituated group.) While sitting on the side of the trail, stuffing our faces, one of the guys in our group stood up, looks back on the trail and says, “There are three gorillas right there. I shit you not.” A mom and a three-year-old and a baby from the habituated group made a brief appearance right on our trail, due, likely, to the famous curiosity of said three-year-old, and the fact that the habituated group hadn’t had their daily visit.
More pictures from our gorilla tracking adventure:

crawling through the deep bush.

Erin thinking, “we are really in the deep bush.”

There is a gorilla in the background of this picture, I swear.
In preparation for our gorilla trek, we spent a morning tracking chimpanzees through Kalinzu Forest Reserve. We found a wild group way up in the canopy that did not care one way or the other about us looking up at them from below. They cared so little, in fact, that one of the males took the opportunity to copulate with a female having her estrus for the third time. (You can tell a female is in heat by her swollen rear end. They go into heat frequently — often twice a month — until they get pregnant.) The reason that the non-dominant male was able to copulate with the female was that the females often don’t get pregnant until their fourth or so estrus, which is when the dominant male begins to be protective of their copulation.

Looking up at the chimps.

Chimp!
A few more pictures from our African overland adventure so far:

So far, our exorbitantly-priced “official” taxi ran out of gas in the rush-hour-packed streets of Nairobi on the way to the hotel from the airport. (So, we waited anxiously in a cab with all our belongings while being assured that God is Great and that all these people are Christians and that no one will touch us, but just to help God out, we were locked into the vehicle with all the windows rolled up while our taxi driver worked with a motorcyclist to get us some gas.) And a man on the streets (which are actually packed with incredibly friendly people who have offered us help and directions and even walked us all the way to the restaurant we were looking for) asked Dan if Dan would give me to him. (Dan’s first thought was, “she’s not mine to give,” and his second thought was that given my expensive tastes, Dan didn’t have enough cattle to actually make that trade.) And all we’ve gotten are these awesome pictures. 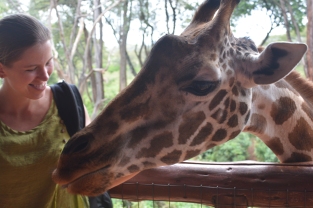 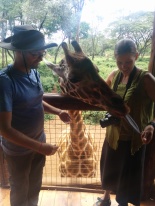 The elephants are from the Sheldrick Trust Orphans Project, which takes care of elephants orphaned due to poaching, starvation, or other “human-wildlife conflict.” The elephants are taken care of at the orphanage for about three years before beginning a 5-10 year process of being re-introduced to the wild through making friends with wild elephants. The folks at the orphanage told us that female graduates of the program often return to show off their wild-born babies to the folks working to reintroduce new elephants into the natural parks — elephants really do never forget. The giraffes are from the Giraffe Center, where 9 giraffes (2 males and 7 females) are part of a breeding program to increase the numbers of this endangered subspecies of giraffe. Before today, my favorite giraffe fact was that giraffe babies fall at least four feet to the ground when they are born. Today, that fact was enhanced by new knowledge that giraffes can actually sit down (though they generally must keep their head elevated to regulate their blood pressure), but they just don’t sit while they are giving birth, and that they have a 15-month gestation period.

Tomorrow is day one of our 24-day participatory camping safari, which will be spent in Nairobi, and then the “real” adventure begins, taking us through Uganda and Tanzania.