I was excited. We were staying at Coconut Grove Beach Resort, (actually in their sister budget accommodation in the Village). And so, armed as I was with the Brandt-country-specific travel guide, I was ready to head towards Kobi’s bar. But no one knew where it was, and Dan was rolling his eyes. See, things are hard in (most of) Africa, so just because something is in a guide book, that doesn’t mean that it still exists, or that if it does, you will ever find it. And Dan and I had already spent quite a lot of time on Ghana’s coast searching for things highlighted in the book, often spending the equivalent of tens of US dollars in cabs searching an area, only to find a closed or empty bar or restaurant. But Coconut Grove Beach Resort is fairly isolated, and so I figured that, surely, we could find Kobi’s. We walked back and forth across the beach in front of the resort for about an hour before we gave up.

But as we walked back towards the resort’s restaurant for dinner, we heard the drumming. We asked the resort security guards about the music. Though none of them knew the place as “Kobi’s bar” they all knew where the drumming was coming from and could point us up the road to the house, which was set a bit back from the beach (hence our earlier unsuccessful efforts). “Do they serve food there?” “Maybe sometimes.” — We have found this to be a typical response in Africa, and not because people are dodging the question, but because that is actually the answer. They may not usually have food, or even have a kitchen, but anything is possible. So, we resigned ourselves to our overpriced resort dinner for the evening, but afterward, we headed up to what we knew as Kobi’s bar. We met the manager of the bar and the famous Kobi. (Though that is not actually his name, but as is so common in Ghana, one of the possible (though unusual) shortened versions of his name, Kwabena, which he shares with roughly 14% of the male population because children are named based on the day of the week on which they are born. And yet, as you will notice, neither of these names are the name painted on the front of his sign.)

Kobi teaches a bunch of local kids to drum and dance. They practice a lot. They’d be more than happy to put on a performance for us the next day. “Do you serve food here?” “No, but I own a drum store down at Stumble Inn, (the next lodging down the beach from ours) and we could probably work something out.” This was followed by a discussion of the food that we had most enjoyed in Ghana so far, and their favorite dishes. And so, trying to nail down a price, I suggested about what Dan and I had spent on dinner at our fancy, overpriced resort that evening, but made it clear that I wanted to feed the four of us with it — they said that should be fine. The price was 80 cedis — a bit less than $26.

The following evening, we arrived at the bar promptly at 6 PM. (OK, it was more like 6:15 PM, and still we were so early that they didn’t know what to do with us. — Africa time is a thing.) And so, we sat for a bit sharing a beer. (We were told to be mindful of how much beer we drank because there was a lot of food to eat for dinner). A girl, maybe eight years old, plopped down in the chair next to us. “I’m a free spirit.” “Oh wow,” I said. I thought this was an impressive declaration for an eight-year-old, and it had me wondering if I, too, was a free spirit. But then we learned that all of these kids are Free Spirits. They are all involved in a foundation that helps support the drum school, their care and transportation, and occasionally helps some of them travel overseas to perform — several of them had been to Poland and most of them are traveling to the US in March.

Then Kobi showed us their “kitchen” — an incomplete building where the bar manger was bent over three small coal fires. Kobi explained that with the amount of money we had suggested, they had decided that they would just feed the whole school and cook it themselves — and so (due in no small part to the ingenuity and grit of Kobi and his manager) for what we spent at one dinner at a fancy resort, we provided dinner for the four of us adults and 13 kids. And the dinner was no basic affair. There were multiple courses including a soup (which, as we’ve mentioned, is eaten with one’s hands), fried and baked plantains and cassava, red beans, and both fried fish and chicken. But before dinner, there was the show — kids having a ball drumming and dancing for their audience of two — though several local kids came by to see what all the excitement was about. At the end of their last song the girl dancers grabbed us and dragged us onstage, and proceeded to try to teach me to dance.

“No. Put your hand here. No, there. OK. OK, now move your other hand like this…ummm, no, looser, yeah, looser…umm ok.” (Shakes head in resignation of imperfect white girl hand moving.) “OK, now move your body…MOVE YOUR BODY…” (Actually turns and walks off,) proving, empirically, that white girls cannot dance, and that they may in fact be a lost cause. 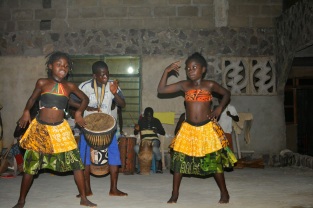